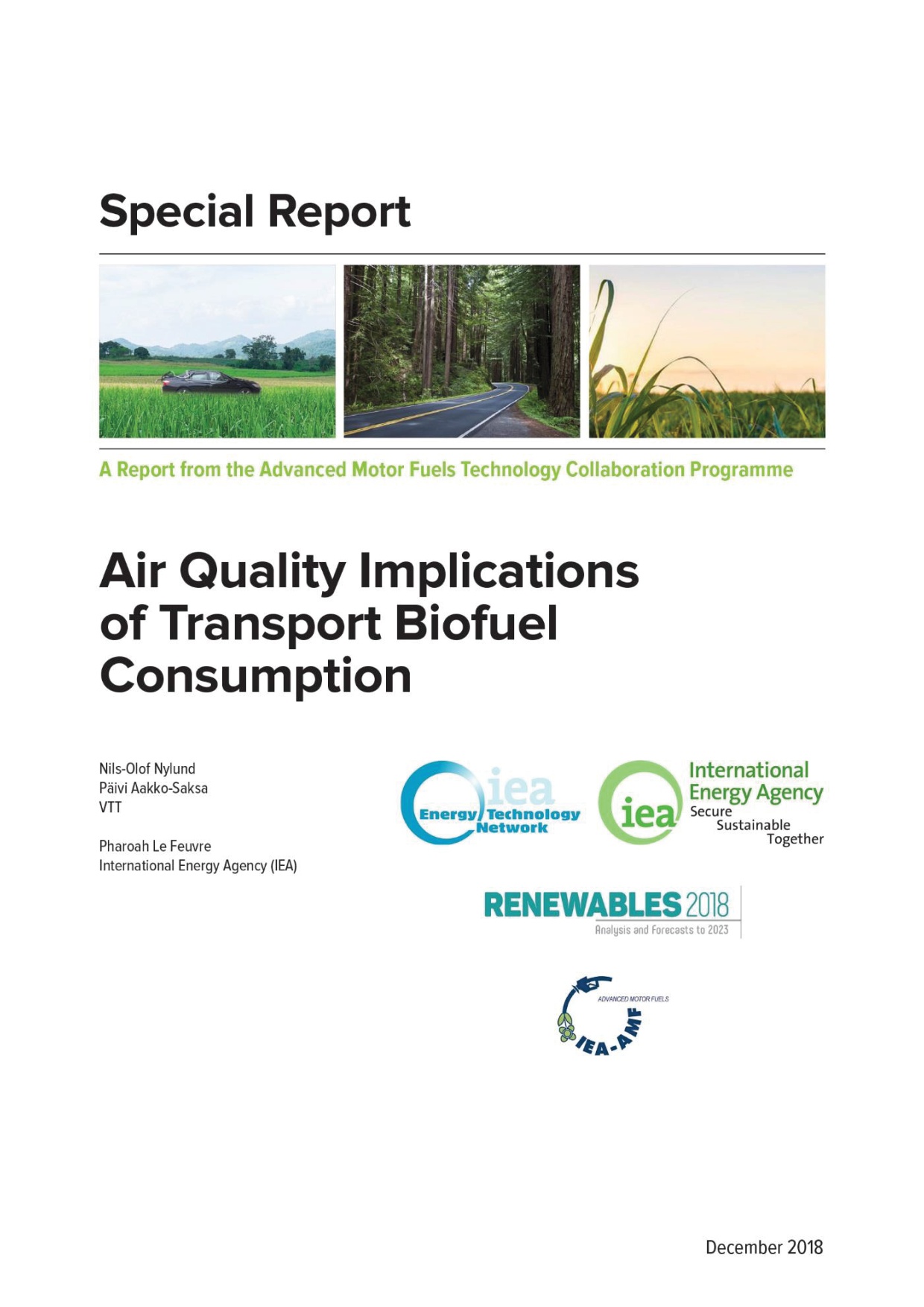 Many countries have initiated policy support for biofuel consumption to reduce transport sector CO2 emissions. However, transportation is also a key contributor to urban air pollution, which is a pressing issue in many large cities. How biofuels compare with fossil fuels in terms of air pollutant emissions that negatively affect human health is therefore a key consideration in their use.

To understand the impact of biofuels on air pollutant emissions from road vehicles, there are two determining factors to consider: first, the combination of the vehicle’s engine and exhaust aftertreatment technology;[1] and second, the characteristics of the biofuel compared with the fossil fuel being replaced. Taken together, these two components provide an indication of the performance of biofuels relative to fossil fuels in terms of air pollutant emissions and impact on human health.

The IEA’s ‘Advanced Motor Fuels’ technology collaboration programme (TCP) compared the emissions of various fuels by category of air pollutant. For cars with less sophisticated engines, air pollutant emissions are higher from diesel engines than from spark-ignition (gasoline) engines (Table 3.8). With cars that meet the equivalent of a Euro 3 emissions standard, e.g. manufactured around the year 2000 in Europe, biomethane has the most potential to deliver low air pollutant emissions.

E85 blends can deliver lower PM emissions than fossil gasoline in older cars, but the reduction is relatively minor. For more widely consumed low-ethanol blends, e.g. E10, the effects on air pollutant emissions are less pronounced than for higher blends, although in older engines without catalysts, E10 can reduce CO and VOC emissions to a small extent. In catalyst-equipped cars the impact of ethanol blending on emissions is minor.

Gasoline vehicles can be converted to use natural gas/biomethane. However, qualified retrofitting companies and robust testing are required to verify performance.

Air pollutant emissions by fuel from modern and older cars

Notes: Older = Euro 3 or equivalent (e.g. model year 2000 in Europe); modern = vehicles that meet Euro 6 emissions standards or equivalent. Assessing the relative performance of biofuels compared with fossil fuels in terms of air pollutant emissions, and therefore health impact, is complex. Consequently, ranking different fuels according to health impact can be subject to debate because biofuels can decrease some air pollutant emissions compared with fossil fuels while increasing others. Consideration must also be given to the fossil fuel substituted, how the biofuel is consumed, e.g. blended (at a low or high share) or unblended, and the level of sophistication of the vehicle’s engine and aftertreatment technology. In addition, the relative health risks of different air pollutants must also be taken into account. PM categorisation for modern cars is made on the basis that direct injection gasoline engines have higher PM emissions than particulate filter-equipped diesel cars.

Given the composition of vehicle fleets over the Renewables 2018 forecast period and beyond, the ability of biofuels to reduce air pollutant as well as CO2 emissions could drive policy support for their use. This is especially the case in countries with pressing air quality concerns due to older vehicle fleets (or lax emissions standards for new vehicles) and large urban agglomerations.