Methanol is used as a gasoline component or in the form of ether (MTBE) in gasoline and Fatty Acid Ester (FAME) in diesel. High concentration methanol blends, such as M85 is used in special Flexible Fuel Vehicles (FFVs). Methanol is used in China as various blends ranging from M5 to M100. In some markets, the focus is on gasoline/ethanol/methanol blends (GEM) fuel blends. In many regions, for example in Europe and North America, blending of methanol is limited up to a few percentages in gasoline. Mid-level or high-level alcohol fuel blends could enable automakers to design high efficiency engines to compensate low energy density of methanol. Also engine technology for methanol use in diesel engines has been developed.

When considering methanol use as gasoline component, corrosion inhibitors, co-solvents, and alcohol compatible materials in vehicles are needed to resist phase separation, to maintain stability and safety.
Methanol can reduce emissions of carbon monoxide, hydrocarbons and nitrogen oxides when compared to gasoline. However, formaldehyde emissions tend to increase, especially at cold-starts. Methanol is biodegradable.

Methanol is one of the most common chemicals globally with capacity of about 95 million metric tons (IHS Chemical). According to a IHS global market study, driven by Chinese demand growth, global methanol demand increased 23% from 2010 to 2012, and annual demand for the product is expected to increase from 61 million metric tons in 2012 to 146 MMT in 2022.

Methanol prices are competitive with gasoline prices, even when considered on an energy equivalent basis (Bromberg and Cheng 2010). In fact, methanol prices in China are considerably lower than gasoline on an energy equivalent basis, and this has been a key factor driving the strong growth of methanol as a transportation fuel in China over the last years.

Auto manufacturer's recommendations for fuel gasoline qualities in the WWFC 2006 edition states that "Methanol is not permitted". In Europe, max. 3 vol-% methanol is allowed to be blended in gasoline under the Fuel Quality Directive (2009/30/EC) and CEN standard (EN 228). In the U.S., ASTM D 4814-10a limits methanol up to 0.3 vol-% or up to 2.75 vol-% with an equal volume of butanol, or higher molecular weight alcohol. U.S. EPA waivers under the substantially similar rule allow for methanol levels higher than ASTM D4814-10a, with the “Octamix” waiver allowing a maximum of 5% by volume methanol, with a minimum 2.5 vol-% co-solvents (one or a mixture of higher alcohols including ethanol, propanols, butanols and pentanols). ASTM D5797-07 standards specifying fuel methanol blends (M70- M85) are now being updated by an ASTM Task Force. Specifications for neat methanol exist as well, for example ASTM D-1152/97 and specification of the International Methanol Producers & Consumers Association.

In China, a national standard for M85 fuel containing up to 85% of methanol is approved to be used as motor fuel (Green Car Advisor 2009, Methanol Institute 2011). In addition, standards are in place in several provinces in China that govern the use of methanol in various blends with gasoline ranging from 5% to 100%, while a national standard for M15 fuel is in the final drafting stage.

Methanol is included in the oncoming rules for marine fuels with low flashpoint (Moirangthem 2016).

Table 1 shows some properties of methanol. 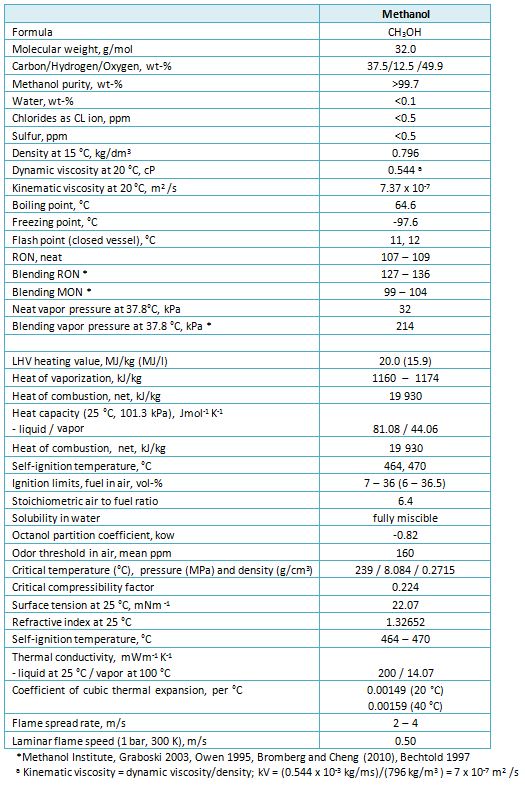 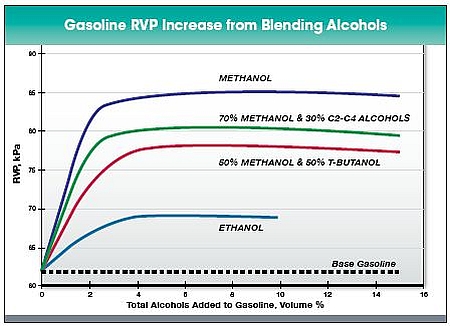 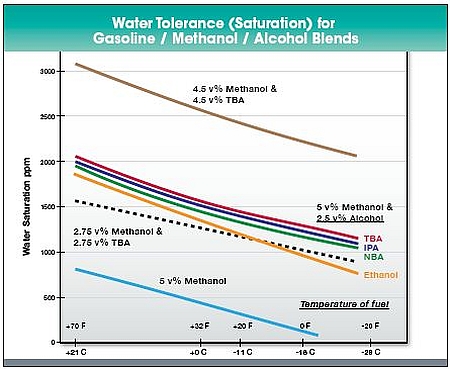 When considering methanol use as gasoline component, corrosion inhibitors, co-solvents, and alcohol compatible materials in vehicles are needed to resist phase separation, maintain stability and safety. Materials and compatibility issues as well as safety aspects are discussed e.g. in the publications from The Methanol Institute. Aluminum, carbon steel, stainless steel, bronze, Flurel™, fluorosilicone, polysulfide rubber, Viton™, acetal, nylon, Teflon™, and fiberglass-reinforced are recommended materials. Materials that are not recommended include galvanized metals, Buna-N™, neoprene, polyurethane, and alcohol-based pipe dome. According to Bromberg and Cheng (2010) methanol fuels at any concentration can be very aggressive towards magnesium, and if water is present, towards aluminum. Corrosion inhibitor additives and formulated engine oils can be effective to reduce corrosive effects of methanol. Bromberg and Cheng (2010) mention that it is not clear if conventional fibre-reinforced tanks are compatible with methanol fuels at high temperatures, since adverse effects have been observed in this tank and lining material at 50 °C.

Neat methanol burns with an invisible flame, which is a safety risk aspect. Otherwise methanol may be considered even as a safer fuel than gasoline, harder to ignite, slower burning, and producing one-eighth the heat of gasoline. Methanol, like all transportation fuels is toxic and should not be ingested. Methanol is readily biodegradable in both aerobic and anaerobic environments, and with a half-life in ground and surface water of one to six days.

Methanol use in engines

Methanol can be used as low or high concentration blends for light duty and heavy duty applications, and with special engine technologies for marine sector. Methanol was the primary alternative fuel considered for transport sector in 1970’s and 1980’s. At that time, the major driving force was to reduce dependence on fossil oil. Methanol was used as a transportation fuel until the mid-1990s in North America and Europe. A knowledge synthesis on methanol as a renewable energy resource was published by Landälv (2017).

Methanol is used today, for example in a form of ether (MTBE) in gasoline and as Fatty Acid Esters (FAME) in diesel. High methanol concentrations, e.g. containing 85 vol-% methanol in gasoline (M85), can be used only in special Flexible Fuel Vehicles (FFVs), which were actually first developed for methanol and later on optimized for ethanol. Methanol accounts for 7-8% of China’s transportation fuel pool existing in various blends ranging from 5% methanol in gasoline (M5) to 100% methanol (M100). Methanol-blended fuels are explored also by other countries, such us Israel, Australia, Sweden, Poland, United Kingdom, Iceland, Netherlands, Trinidad and Tobago, Iran, Pakistan, Vietnam, Azerbaijan, and Uzbekistan. However, for example in Europe and North America, blending of methanol is limited up to a few percentages in gasoline. Infrastructure and cars are not designed for methanol use in these regions. Mid-level alcohol fuel blends (A20-A30) or high-level alcohol fuels can be high octane fuels that would allow automakers to optimize cars with higher engine compression ratios, downsized engines, increased turbocharging, and enhanced direct injection.  High engine efficiency could compensate for methanol’s low energy density. Bromberg and Cheng (2010) have highlighted the potential of directly injected spark ignited engines for heavy-duty vehicles. Methanol is actually used for race cars and in some other specialty engine applications for its high octane numbers.

In some markets, the focus is on blends of gasoline, ethanol and methanol (GEM). In this concept, ethanol is serving as a co-solvent for methanol. These tri-component blends have constant air-to-fuel ratio of 9.7:1, which is same ratio as air-to-fuel ratio for E85 fuel (Figure 3). Behaviour of virtual and physical alcohol sensors used in the FFVs have been studied with GEM blends, as well as performance of cars at cold temperatures, emissions and costs. The results indicate that GEM blends could be used in FFV cars as a drop-in alternative to E85 fuel (Turner et al. 2012).

In IEA-AMF Annex 44 (Fan, Z. and Donglian 2017), methanol blends (M15 and M30) were studied in comparison with neat gasoline using two PFI and two GDI vehicles. The tests were conducted at normal (25â„ƒ) and at low ambient temperatures (-7â„ƒ).Also ethanol blends were studied, but those results are not referred here. Many emission components were high during the first acceleration, but reduced to nearly zero as the catalyst lighted off. In both test temperatures, hydrocarbons (HC), carbon monoxide (CO) and methane emissions decreased slightly as the alcohol proportion of fuel increased, while nitrogen oxides (NOX) increased slightly. Tailpipe CO2 did not change substantially. Unburned methanol, formaldehyde and acetaldehyde emissions increased proportionally with the increasing alcohol content, while benzene, toluene, ethylene, propylene, 1,3-butadiene and isobutene decreased slightly. In the evaporative emission tests, only slight differences in the HC emissions were observed between M15 and gasoline.

In the earlier work, increasing methanol content of fuel has reduced CO, HC and NOx when compared to gasoline, while formaldehyde emissions have increased, especially at cold-starts (Bromberg and Cheng 2010, Bechtold et al. 2007 and Ohlström et al. 2001).

Methanol and LNG are regarded as the most promising marine fuel alternatives (Moirangthem 2016, Ellis and Tanneberger 2015). Also engines for methanol use in marine sector have been developed. Wärtsilä has developed a methanol-diesel retrofit concept, a dual-fuel technology, which has the advantage of using diesel as a back-up fuel. Common rail system for methanol injection, cylinder heads, fuel injectors and changes in fuel pumps are needed, amongst others. (Haraldson 2013). This concept is demonstrated in Stena Germanica in Sweden. MAN has developed a methanol engine technology that is used in seven 50,000 dwt tankers by Waterfront Shipping in Canada. The alternatives for marine sector were discussed in the IEA-AMF Annex 41 (McGill et al. 2013).

In IEA-AMF Annex 46 (Nylund et al. 2016), performance of Scania ethanol engine using additized methanol was preliminarily studied. This engine concept proved to operate quite well with additive treated neat methanol. However, with these methanol fuels the engine didn’t reach full power, and the injection periods on partial load were prolonged compared to ethanol operation. Methanol increased the particulate matter (PM) emissions, which was thought to be an indication of semivolatile components or artifacts as methanol contains no soot forming carbon-to-carbon bonds. The standard oxidation catalyst most probably would have reduced this PM with methanol. A blend of 70 % ethanol and 30 % methanol delivered lower CO, HC and NOx emissions compared to the baseline ethanol fuel. However, it must be stated that Scania doesn’t approve the use of methanol fuels.

Generally, the special engine technologies discussed for ethanol can also be considered for methanol use.

Bechtold, R., Goodman, M. and Timbario, T. (2007) Use of Methanol as a Transportation Fuel. Report prepared for Methanol Institute.

Bromberg, L. and Cheng, W. (2010) Methanol as an alternative transportation fuel in the US: Options for sustainable and/or energy- secure transportation. Final report. UT-Battelle Subcontract Number:4000096701

Ellis, J. and Tanneberger. K. (2015) Study on the Use of Ethyl and Methyl Alcohol as Alternative Fuels in Shipping Report Prepared for the European Maritime Safety Agency (EMSA ). Final Report.

Annex 4
1994: “Production of alcohols and other oxygenates from fossil fuels and renewables”
Download Report